Junior Athlete of the Month for January

The award this month goes to.....
Amelia Pettitt 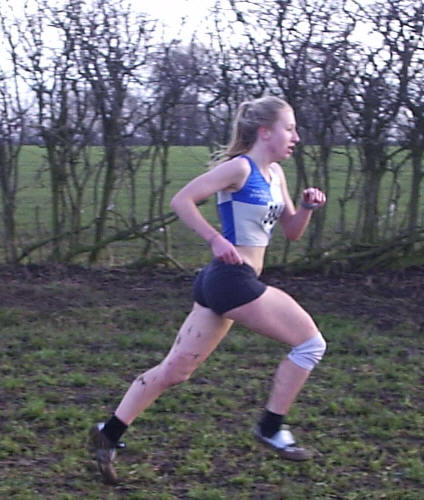 It is always difficult to pick an athlete of the month in January, the cross country season begins to hot up with County and Regional races for all age groups and the indoor season starts.
This year is no exception, there have been a number of really good performances including Elliot Bowker, Matt Sheen, Mike Vennard, Tessa McCormick and Jonathan Owen over the country.

However the award this month goes to Amelia Pettitt!

Amelia is an extremely conscientious and hard working athlete and although not gifted with a lot of speed more than makes up with determination and endurance.
She has continually improved over the past few years and her performances, in particular in the Cheshire County Road Race GP Series, has made her one of Cheshire’s foremost female athletes.
There is little doubt that January 2013 has been one of her best months, following second place in the Cheshire U20 Cross Country she came a brilliant 2nd in the Northern Counties Cross Country at Knowsley on 26th January, being beaten by one of the country's top triathlon stars Georgia Taylor-Brown and beating some of the country's best U20 athletes.
This is also Amelia’s first year as an U20 which makes the performance all the better.


We are now looking for nominations for February.
Just give the athlete's name and why you think they deserve the award to one of the club's officials.
Or send an email to info@valeroyalathleticclub.co.uk.