An excellent turn-out for the T&F League Round 2 at Connah's Quay Deeside on Sunday 19th May!
Parents and athletes enjoyed the sun and a really well organised event. Many youngsters were competing for the first time and more experienced competitors had a go at new events.

Ellie Jackson won the U13G 200m, with Millie Nugent also winning her heat. Ellie also won the U13G high jump, with Millie beating her own personal best by 13cm with a jump of 1.28m.
Ellie won the U13G shot by a long way to complete her four wins for the day and set three new club records.

Matthew Jakeman ran in the 3000 metres, where he bettered his previous race from Round 1 by 24 seconds with a time of 9.24.7.
Dan Jakeman and Matthew Hopton also won their U13B 100m.heats with Ben Lee coming second overall.
Ben also won the 1500m with a new club record time of 4.53.7.

Also, worthy of a special mention is the superb effort by our relay teams with victories in both the 4 x 100 U13 Boys (Matt Hopton, Jordan Kelly, Dan Jakeman and Ben Lee) and U13 Girls (Millie Nugent, Molly Billinge, Beth Kelly and Ellie Jackson). 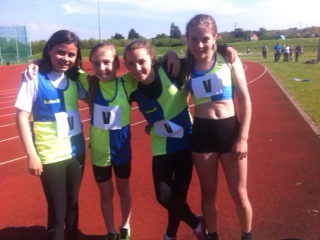 AND the 4 x 400 Senior Mens (a first ever team for VALE ROYAL in Cheshire Track and Field).

This, together with the individual performances from both our experienced and novice athletes, made for a really good, enjoyable day for all.