Junior Athlete of the Month for August

The award this month goes to.....
Amy Hinchly 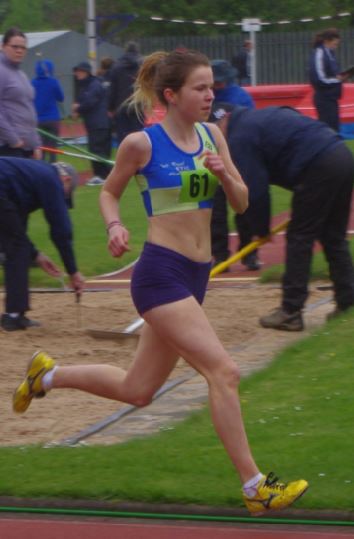 Following the County and School Championships, August is often a quiet month giving the athletes the chance to try some new events.
This has now changed somewhat, with the Northern U15 and U17 Championships now in the middle of August.

Two Vale Royal athletes are now Northern Champions – Amy Hinchly in the U17 Women and Elliot Bowker in the U17 Men – both over 1500m.
These were excellent performances against strong opposition and rounded off a good season for both of them.

This made the awarding of the August Athlete of the Month difficult. But it has been decided that the award should go to Amy because of her other achievements.

Amy ran two superb 3000’s. In the final Trafford Open Meeting of the season, she ran her first 3000 and achieved an excellent 9min 58.34sec which put her in the top 10 in the National U17 rankings.
She followed this by doing the 3000 in the National Championships and improved her PB to 9min 54.07secs which ranks her 8th in the rankings and is also a Vale Royal U17 record, breaking Rebecca Craigie’s record of 9min 56.07 achieved in 2008

So it’s well done to Amy!

We are now looking for nominations for September.
Just give the athlete's name and why you think they deserve the award to one of the club's officials.
Or send an email to info@valeroyalathleticclub.co.uk.